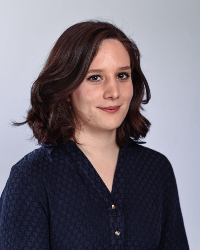 Mariana Díaz García works as a research fellow at the United Nations Interregional Crime and Justice Research Institute (UNICRI), for the Knowledge Center Security through Research, Technology, and Innovation and the CBRN Unit. Her experience in international organizations include her role as researcher for the International Campaign to Ban Landmines - Cluster Munition Coalition and collaboration in projects with the European Union Intellectual Property Office (EUIPO) and the FBI.

Her work has focused on the role of technology in security issues. This has included the malicious use of social networks by extremist groups and organized crime, as well as the use of technology in intellectual property crimes. Other areas of research include technology to improve CBRN and WMD defense, infiltration of organized crime to the legitimate supply chain, and ideology and legitimization of armed and extremist groups.

She holds a MA in Middle Eastern Studies from Leiden University and a BA in International Relations from Tecnológico de Monterrey.

Social media and organized crime: disinformation from a cybersecurity perspective

Criminal groups have used social networks to share content that popularizes a specific image of their members. This strategy is related to other objectives, such as the promotion of a positive image to facilitate the recruitment of new members and the creation of a social base for maintenance and territorial expansion. This type of disinformation, based mostly on elements of narcoculture, should be analyzed as a cybersecurity issue, as it uses the same infrastructure and tools as other cyber threats.

The online activities of organized crime should be studied as an extension of more general strategies. Criminal groups have used social networks for promotion in a positive way, with the objective of creating an attractive narrative for the recruitment of new members, as well as preserving and increasing their social base for territorial control. These actions can be interpreted as a process of disinformation because it refers to the intentional manipulation of content to achieve a goal. Disinformation disseminated online can be considered a cyber threat because of the implications of the process, especially, the medium and environment (cyberspace) where it takes place. It is important to analyze the role of disinformation from multiple perspectives to properly stipulate its role in society, the role of technology in its distribution, and the strategies that can be taken to combat it. Disinformation requires strategies that consider tools used to mitigate cyberthreats, but also techniques focused on education and public awareness to minimize its vulnerabilities. This entails that the technological tools, actors, and targets converge with other cybersecurity issues, such as social engineering or personal data theft. The inclusion of disinformation as a cybersecurity issue would facilitate the analysis of the problem and future threats, generating a framework to combat it in a more comprehensive manner.